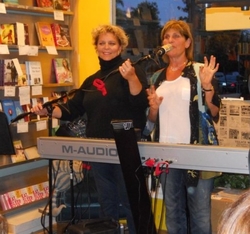 From 1985 to 1992 Amy wrote a weekly column, Hard Lines, for The Kingston Whig Standard in Kingston, Ontario, Canada, a grand old paper, then owned by the Davies family (of Robertson Davies fame), only the second owner in 156 years. Alas, a few years later it was purchased by Southam Syndicate and the glorious Kingston Whig Standard Literary Magazine died, but the brilliant, entrepreneurial editor, Neil Reynolds agreed the paper could use a feature for children. Amy created The Bedtime Story, featuring adaptations of myths, legends, folk and fairytales, with occasional original tales. For one year the feature ran six days in The Whig and was soon picked up by 10 other Canadian papers. Amy wrote one per week and edited five others, and Jillian Gilliland illustrated all six each week.

In 1992 Universal Press Syndicate approached and TELL ME A STORY was born. That feature, still illustrated by Jillian, this time in color, has run every week since in hundreds of newspapers around the world. Together Amy and Jillian have published more than 1,000 stories (competing beautifully with Scheherazade's 1001 Nights).

In 2006, Amy hired composer Laura Halland director Lori Ada Jaroslow, and since that time has produced three CD audiobooks that have won awards from Parents' Choice, the National Association of Parenting Publications and a coveted Audi Award.

A collection from the TELL ME A STORY column.

A collection from the TELL ME A STORY column.

BUY TELL ME A STORY

Collected stories from the original TELL ME A STORY column, illustrated by Jillian Gilliland

TELL ME A STORY, 3 DISC SET

Over three hours of multicultural folktales and music, read by some of stage and screen's most dynamic and talented performers. A three-disc set, Timeless Folktales, Animal Magic and Women of Wonder.

TELL ME A STORY: TIMELESS FOLKTALES FROM AROUND THE WORLD

A wide range of listeners of all ages will relish Tell Me A Story: Timeless Folktales from Around the World, read by eight talented actors and covering tales from Africa to Scotland. From Anansi and the Turtle's Feast, to the frightening The Boatman's Howling Daughter, over seventy minutes of vivid description pack a fine gathering which will be a must for folktale collections for any age group. ~ Diane Donovan, Editor & Senior Reviewer, Bookwatch, Midwest Book Review

TELL ME A STORY 2: ANIMAL MAGIC

Parents' Choice Silver Honors Award, National Association of Parenting Publications Gold Medal, this is the second in a series. Seven multicultural tales, selected from Universal Press Syndicate's worldwide popular newspaper feature Tell Me A Story by Amy Friedman. Readings are by some of stage and screen's most luminous performers, and each story is accompanied by music by composer Laura Hall. Stories from Africa, China, Australia, East India, Canada, North America and Central America. Sixty-one minutes.

TELL ME A STORY 3: WOMEN OF WONDER

Amy also occasionally performs (sometimes with others) at bookstores and schools. Here's a video of the amazing puppeteer Gina Pavlova at a TELL ME A STORY reading, performing a Siberian Legend, Reindeer Maiden (from Tell Me A Story 3: Women of Wonder):