One Soufflé at a Time

Anne Willan demystified classic French culinary technique for regular people who love food.  Her legendary La Varenne Cooking School—in its original location in Paris and later in its longtime home in Burgundy—trained chefs, food writers and home cooks. One Soufflé at a Time tells her story and the story of the food-world greats—including Julia Child, James Beard, Simone Beck, Craig Claiborne, Richard Olney—who changed how the world eats and who made cooking fun. Tens of thousands of students have learned from Willan, not just at La Varenne, but through her large, ambitious Look & Cook book series and twenty-six-part PBS program.  Now One Soufflé at a Time, featuring 50 of her favorite recipes, brings Willan's own story of her life to the center of the banquet table.  Get the book now.

Review by Gay Bilson in the Australian Book Review 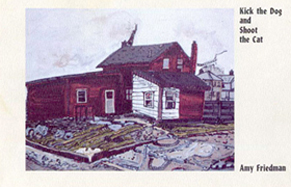 KICK THE DOG AND SHOOT THE CAT, Oberon Press

When Amy moved to a sheep farm in eastern Ontario from her apartment in Manhattan, she noticed that her work in film production (on such films as Ghostbusters) wasn't all that different from tending sheep, and this book was the result. It received a rave review in The Toronto Globe by William French, the featured review on a page that included books by Thomas Pynchon, Carlos Fuentes, and Larry McMurtry. That review hangs on Amy's office wall, but here's a review out of University of Manitoba's archives.

BUY KICK THE DOG AND SHOOT THE CAT, KINDLE EDITION

NOTHING SACRED: A CONVERSATION WITH FEMINISM, Oberon Press

This book grew  a court case against a young Queens University student -- but it became something far different, a book that infuriated some feminists, though that had never been the intention.

Eons before self-publishing became de rigueur, in 1983, William Warner, his then-wife, designer Molly Renda and Amy decided that they knew so many extraordinarily talented (unsung) writers they would publish a collection of their stories. They funded the production of ISBN by selling advance subscriptions, and produced a beautiful book. Molly has since become the book designer for Algonquin Press, and many of the writers included have since published stellar work. The writers included Amy and William along with Stephen O'Connor, Robert Rosenberg, Thomas Frick, Carl Haarer, Diane Botnick, Michael Brondoli, Safiya Henderson, Jacqueline Austin, and Ann Goette.