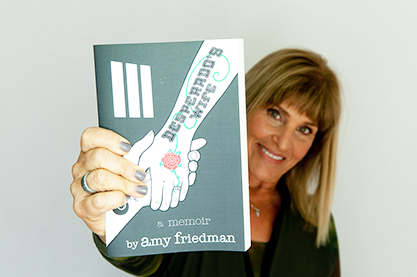 Amy Friedman grew up in Cleveland, Ohio and has an undergraduate degree from Barnard College, Columbia University and an MA in creative writing from City College, New York. She is an author, co-author, editor and writing teacher whose work has appeared in numerous publications, including the New York Times, Salon and the Toronto Globe and Mail. She is the author of Kick the Dog and Shoot the Cat, Nothing Sacred: A Conversation with Feminism, Tell Me a Story, The Spectacular Gift, and Desperado’s Wife: A Memoir. Amy also is the writer/producer of the award-winning audiobook series, Tell Me a Story, based on her long-running syndicated newspaper feature for Universal Press Syndicate. She has co-authored and ghosted many books, including the winner of IACP’s 2014 book award for Literary Food Writing, One Souffle at a Time: A Memoir of Food and France with Anne Willan.

Amy’s work has been anthologized in a number of places, including most recently Stricken: The 5,000 Stages of Grief from Dalton Press and the Seal Press release Dancing at the Shame Prom: Sharing the Stories That Kept Us Small.

Amy has also written for the stage and screen and teaches memoir and personal essay in the UCLA Extension Writers Program, at the Skirball Cultural Arts Center in Los Angeles, and at the Idyllwild Arts Center in California.

Amy lives in Los Angeles with her husband, the writer Dennis Danziger.

"Line by line, Amy Friedman is one of the most elegant and insightful writers I know. Her ability to dive into an experience and extract deeper meaning should be a model to writers everywhere." ~ Hope Edelman, author of The Possibility of Everything

"Amy has been a pleasure to work with. She picked up my "voice" very early on and has carried it with style and a great deal of hard work, adding excellent structure and planning to the book. She has become a very good friend, what better recommendation could there be!" ~ Anne Willan, founder, Ecole de Cuisine La Varenne

"Like an urban gardener, clearing off needles and broken bottles from rich soil, Amy Friedman finds the story behind the story.  As an editor, she has the rare ability to nurture, clarify, and enhance the creative process in others, without letting her experience drown out still burgeoning voices.  Amy is there from bud to blossom." ~ Lauren Marks, author, A Stitch of Time: Portrait of a Mind in Constructionand PEN USA Emerging Voices Fellow 2011

"Like the best editors and teachers, Amy's ability to understand both writing and people is astounding." ~ Linda Folsom, Disney imagineer

"It's rare to meet a teacher and editor like Amy. She is a caring, intelligent, witty teacher and editor who has guided me time and again.  She has improved my writing and continues to be a driving force in my career.  Amy gives insightful, rich feedback without ever making judgments,   She is constantly curious and passionate and I always feel inspired after working with her.  She helps you to dig deep, to stay honest and to be true to yourself.  If you have a chance to work with her - do yourself a favor and dive in head first!" ~  Shannon Noel, actor/writer

"Amy Friedman -- as an instructor and as an individual -- is that rare combination of talent and temperance.  She has a good ear and great eye for what rings true in a person and in their storytelling.  Amy's ability to coach a writer into greater realization of his or her work's vision is uncanny.  She is an experience I will never forget, one that I've continued to count on over the years." ~ Susan O'Meara, writer, Kenya

Amy has magical powers. She sees around the corners and through the walls of a story and unearths something you haven't yet seen or known. And no matter how often I've seen her do it, I'm amazed every time. ~ Melissa Roth, writer, New York City